(CNN)In the six weeks since President-elect Joe Biden won the White House, President Donald Trump has proved again and again that he has little concern for anyone other than himself, scheming and spreading falsehoods as he seeks to overturn the election while seeming unmoved by the grim climb in coronavirus cases that has led to more than 316,000 deaths in the United States while countless Americans struggle to keep food on the table.

Just when it seemed like the President couldn’t sink any lower in his quest to subvert the November election results, his mere entertainment of invoking martial law to negate Biden’s victory underscores how laser-focused he still is on his own interests at a time when the nation is mired in crisis.
The idea came up during an extraordinary Oval Office meeting Friday between Trump, members of his team and two of his most discredited outside advisers — lawyer Sidney Powell, a fount of baseless voter fraud theories, and former national security adviser Michael Flynn, whom Trump recently pardoned and who first floated the martial law idea earlier last week. The impromptu gathering devolved into a shouting match between his advisers — some of whom were forcefully resisting Powell and Flynn’s outrageous suggestions — but it nevertheless showed how Trump continues to surround himself with sycophants, no matter how crazy their theories are as long as they will benefit him.
Though Trump is fighting hard to stay in the White House, he has shown little interest in doing the actual work required of the commander-in-chief. He has done nothing to try to curb the spread of Covid-19 — tweeting Saturday that “we don’t want to have lockdowns. The cure cannot be worse than the problem itself” — and he has not interceded to try to force bickering members of Congress to strike a deal on an emergency stimulus package that would alleviate some of the nation’s financial suffering as some 12 million Americans face the loss of their jobless benefits on December 26.
For the first time Saturday, Trump addressed the massive cyberattack on US government agencies, contradicting his own Secretary of State Mike Pompeo, who said Friday that “we can now say pretty clearly that it was the Russians that engaged in this activity.” 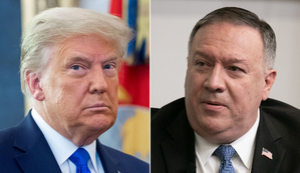 Trump downplays massive cyber hack on government after Pompeo links attack to Russia
Trump, who has inexplicably proven unwilling to call out Russia or President Vladimir Putin for nefarious acts over the past four years, confounded national security experts on Saturday by tweeting that “it may be China” that is responsible for the attacks.
“I have been fully briefed and everything is well under control,” Trump wrote on Twitter.
Showing his lingering insecurity about the legitimacy of his 2016 victory, and his rejection of any suggestion that Russia tried to interfere in that contest against Hillary Clinton to help him win, Trump went on to say that “Russia, Russia, Russia is the priority chant when anything happens.”
“Discussing the possibility that it may be China (it may!),” the President tweeted of the cyber hack that breached US government systems.
Some Republican senators gingerly tried to sidestep the President’s latest theories Saturday. Sen. Marco Rubio, the Florida Republican who is acting chairman of the Senate Intelligence Committee, said, “Everything I’ve seen is indicative of something that’s pretty widespread and serious and I think indicates that it was the Russian intelligence service.”
When asked about Trump’s assertion about China being involved in the massive cyberhack, Sen. Jim Inhofe, who chairs the Senate Armed Services Committee and was briefed on the attack, replied, “All of I’ve heard is Russia.”
The Oklahoma Republican also told CNN’s Manu Raju that Trump made a bad decision by vowing to veto the annual defense authorization bill, which Trump has claimed is weak on China — a view Inhofe disputes.
“I really believe he’s not getting the right advice. I know people advising him — they don’t appreciate the fact that I say that,” Inhofe said. “But I believe that.”
Rep. Adam Smith, the Democratic chairman of the House Armed Services Committee, called Trump “an aspiring fascist” who admires Putin and wants the same kind of control that Putin exerts over his own country and its elections. Smith said the reports that Trump entertained Flynn’s theories about invoking marital law were “unbelievably disturbing.”
“He is talking about basically leading a coup against the United States government and destroying our Constitution,” Smith told CNN’s Wolf Blitzer on “The Situation Room” Saturday night. “There needs to be strong bipartisan pushback against this. It is an unbelievably dangerous thing for the President to be talking about.”

Trump continues to test the guardrails of democracy as he looks ahead to January 6 when a joint session of Congress meets to formally count the Electoral College results, which have now been certified by all 50 states. Biden overwhelmingly defeated Trump with 306 electoral votes to Trump’s 232.
But that didn’t stop Flynn from raising the martial law idea, although it’s unclear whether Trump endorsed the idea when it came up in the White House meeting Friday, CNN reported. Other officials who attended the meeting, first reported by the New York Times, rejected that idea along with the notion that Powell should be named as a special counsel who would investigate claims of voter fraud, which have been consistently debunked.
The meeting took an “ugly” turn when Powell and Flynn accused Trump officials of failing to back up the President in his efforts to overturn the results.

Heated Oval Office meeting included talk of special counsel, martial law as Trump advisers clash
The pushback against Flynn and Powell’s theories and suggestions does not appear to have tempered the President’s interest in finding a way to block Biden from taking office as he tweeted baseless theories Saturday about compromised voting machines.
Trump’s political operation has raised more than $207 million since the election, which his campaign claimed would support his legal efforts. Though many of the solicitations asked supporters to give to support his court battles, much of the money was directed toward a new leadership PAC that Trump started shortly after the election.
Though his campaign legal team once distanced itself from Powell — and advised staffers Saturday to preserve all documents related to Dominion Voting Systems and the pro-Trump attorney in anticipation of litigation by the company against her — Trump has been urging other people to fight like Powell has, multiple people familiar with his remarks told CNN’s Kaitlan Collins.

While the President dabbled in election conspiracy theories, Republican and Democratic leaders continued to negotiate the emergency stimulus bill on Capitol Hill after passing a two-day stopgap measure that prevented the government from shutting down on Friday night but that expires Sunday night.
Leaders have said for days that they are close to a deal, and one of the major sticking points Saturday was a disagreement over the Federal Reserve’s emergency lending authority — a seemingly esoteric issue that would have seemed far removed from the lives of most struggling Americans if it had held up the deal.
Pennsylvania Sen. Pat Toomey had argued that the emergency lending program, created under the CARES law passed in March, to boost the economy should be phased out because he believed it could become a slush fund for the incoming Biden administration. Democrats said that authority is needed to bolster the economy. Late Saturday night, Toomey agreed to drop his demands over the broad language in his proposal, a Democratic aide told CNN’s Manu Raju.
“We’re getting close, very close,” Senate Minority Leader Chuck Schumer told reporters as he left the Capitol late Saturday night. “If things continue on this path and nothing gets in the way, we’ll be able to vote tomorrow.”
The slow pace of negotiations and the lack of transparency about the fine points of the deal have proved frustrating to some members. Democratic Sen. Chris Coons of Delaware told CNN’s Suzanne Malveaux earlier Saturday that the timing of an agreement was still unclear.
“It’s frustrating as all get out to me that we’ve been at the final point now for days,” Coons said. “It’s unclear to me exactly what the last final issues are that are holding us up this weekend. I expect a final vote in the Senate on Tuesday, but it’s entirely possible we’re up here until Christmas Eve given the history of this particular impasse.”