(CNN)The Supreme Court on Friday threw out a challenge for now to President Donald Trump’s bid to exclude undocumented immigrants from being counted when seats in Congress are divvied up between the states next year, but left open the possibility the issue could be revisited at the nation’s highest court.

Friday’s ruling is a narrow victory for Trump as it wipes away a lower court opinion that went against him, but the President still has upcoming hurdles should he try to push through his policy based on census data in his final days in office. 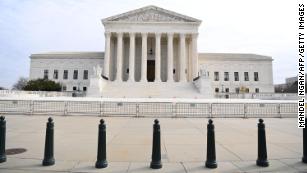 READ: Supreme Court opinion and dissent in census case
The court said the challengers, a coalition of states led by New York and immigrant rights groups, did not have the legal injury necessary to bring the case because the government has not yet announced which individuals it seeks to exclude from the count.
Census officials have indicated they’re facing difficulties processing census responses in time to produce the final count by an end of the year deadline.
If the census numbers are produced after January 20, President-elect Joe Biden has already suggested he would work to reverse Trump’s memorandum signed in July.
The court stressed that it “expressed no view” on the merits of the case, but concluded that the dispute is currently “premature” because of the procedural issues surrounding whether the case was properly before the justices.
The court also knocked the case as being “riddled with contingencies and speculation that impede judicial review.”

The three liberal justices dissented from the opinion.
Justice Stephen Breyer, writing for Justices Sonia Sotomayor and Elena Kagan, criticized the court’s decision to throw out the case based on the “uncertainty” on how Commerce Department officials would attempt to implement Trump’s directive.
Breyer wrote that the “question is ripe for resolution” and that the court should have reached the merits of the dispute and ruled against the President.
“The plain meaning of the governing statutes, decades of historical practice, and uniform interpretations from all three branches of Government demonstrate that aliens without lawful status cannot be excluded from the decennial census solely on account of that status,” Breyer wrote. “The Government’s effort to remove them from the apportionment base is unlawful, and I believe this Court should say so.”
Steve Vladeck, CNN Supreme Court analyst and a law professor at the University of Texas, called Friday’s decision “a bit of a mixed bag.”
“On one hand, the court has thrown out efforts by a number of different plaintiffs to prevent the Trump administration from excluding undocumented immigrants from next year’s apportionment. On the other hand, part of why is because it isn’t at all clear that the government is going to be able to implement its controversial policy before the Biden administration takes over on January 20,” he told CNN.
“So even though today’s ruling is a victory for the Trump administration, it may only be a temporary one — with both the merits of the policy and whether it will actually be implemented in time still to be decided,” Vladeck added.
The American Civil Liberties Union said that the Supreme Court decision is “only about timing, not the merits” — and that if Trump’s policy were to be implemented, they would challenge it again in court.
“This ruling does not authorize President Trump’s goal of excluding undocumented immigrants from the census count used to apportion the House of Representatives,” Dale Ho, the director of the ACLU’s Voting Rights Project who had argued the case, said in a statement Friday. “The legal mandate is clear — every single person counts in the census, and every single person is represented in Congress. If this policy is ever actually implemented, we’ll be right back in court challenging it.”
The Constitution provides that House representatives “shall be apportioned” among the states counting the “whole number of persons in each State” every 10 years.
Congress directed the Commerce secretary to conduct the census and submit the tabulation to the President by December 31. The President, in turn, transmits the number to Congress usually around the first week or so of January.
Trump issued a memo in July outlining a new policy mandating that undocumented immigrants be excluded from the apportionment base. The memo directed Commerce Secretary Wilbur Ross to provide the President with a count of the entire population and a second tally that excludes “aliens who are not in a lawful immigration status.”
A three-judge court in the Southern District of New York blocked the White House policy in September.
“Throughout the Nation’s history, the figures used to determine the apportionment of Congress have included every person residing in the United States at the time of the census, whether citizen or non-citizen and whether living here with legal status or without,” the court held.
Trump’s memo, the court stressed, violates “Congress’s mandate to use the results of the census — and only the results of the census — in connection with the apportionment process.”
Trump has long sought to use the US census as a way to advance his immigration priorities. Last year, the Supreme Court rejected an attempt to ask respondents if they are US citizens.
This story has been updated with additional details.