The time has come to open a new stage in my life,” said Cristiano Ronaldo as it was announced he would be leaving Real Madrid for Juventus in a transfer headline writers in Italy were calling the deal of the century.

At $117 million, now the sixth most expensive transfer of all time, the Portuguese star was not arriving in Turin at a bargain price but there was an expectation that Ronaldo, even in his 30s, would help the Serie A side achieve what had long evaded the club — the Champions League trophy.
Having helped Real to four Champions League titles in five seasons, scoring in the 2014 and 2017 finals, the forward was to be the missing piece in the Juventus jigsaw. The player who could sate what had become an obsessive pursuit. 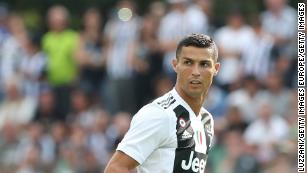 Has the digital age changed football fans?
Juventus has reached nine finals in the competition’s various guises, winning just twice. It is the first club to lose seven finals. Only Bayern Munich, AC Milan and Real Madrid have played in more finals, and all three clubs have a better conversion rate, winning at least six or more titles each.
But despite Ronaldo’s arrival in 2018, Juventus is yet to add a third European Cup to its roll of honors. Three years and three managers later, is the club further away than ever from winning Europe’s biggest prize? Indeed, the best Juventus has achieved during the Ronaldo years is the quarterfinals (in 2018 and 2019).
Dominant in its own league — Juve has won nine Serie A titles in a row — the club has been unable to transfer such authority onto the European stage.
“It almost becomes a self-fulfilling prophecy. They are the team that will always lose in finals,” says Adam Digby, author of “Juventus: A history in black and white.”
“Sometimes they do not help themselves. Back in the 2012/13 season they got to the Europa League semifinals, got a good result in the first leg and didn’t rest any players and got eliminated in the second leg.
“If they’d gone on and won the Europa League that season, they would’ve had the experience of playing in European finals. They were so far behind the likes of Barcelona and Real Madrid, winning a trophy would’ve helped them compete.” 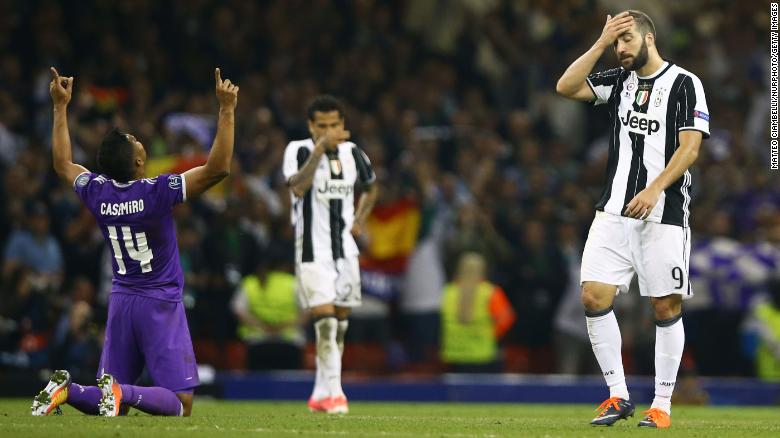 Casemiro celebrates as Real Madrid goes 4-1 up in the 2017 Champions League final.

Juventus’ two most recent finals — in the 2016/17 and 2014/15 seasons — ended in defeats to Real Madrid and Barcelona respectively. According to Digby, Juventus played those finals with an “inferiority complex.”
On its way to the 2017 final in Cardiff, Juventus performed brilliantly and started the final full of confidence. One of the great Champions League goals by Juventus’ Mario Mandzukic leveled the match at 1-1, but after the break Juventus crumbled and succumbed to the club’s fifth Champions League final defeat since last winning the trophy in 1996. The way the team folded suggests the issue is more than misfortune.
“In both games, they managed to get on level terms, and then they just got blown away in the second half of both matches,” adds Digby.
“That speaks to a lack of belief that they were the best team. As soon as they fell behind the second time in both matches, you could see that they gave up.” 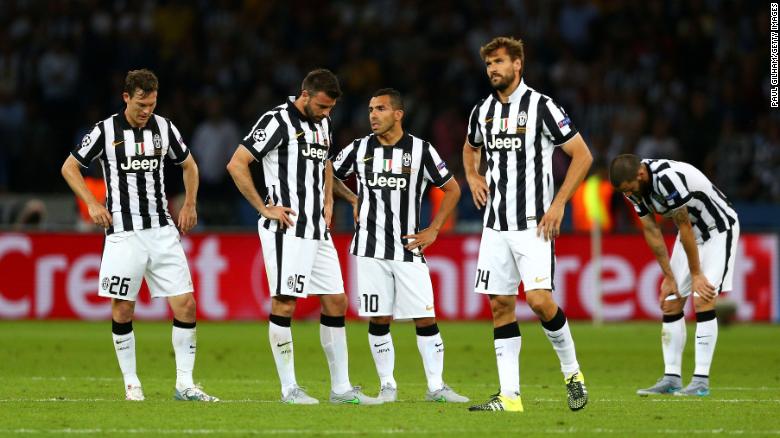 Dejected Juve players after Barcelona scores its third goal in the 2015 Champions League final.
But Barcelona and Real were the dominant teams of the era, boasting the likes of Ronaldo and Lionel Messi, and those two most recent final defeats came before the Ronaldo era, and before a spate of other signings.
In addition to Ronaldo, in recent years Juventus has bought the coveted Matthijs De Ligt in what was a coup for the Turin club, as well as Aaron Ramsey from Arsenal, midfielder Adrien Rabiot and defender Luca Pellegrini. On paper, it is a strong squad that should challenge Europe’s best.
Instead, under Maurizio Sarri last season — the man who replaced Max Allegri after the Italian left having won five Scudettos in five years but, significantly, no Champions League — Juventus lost to Lyon in the quarterfinals.
“When it comes in Europe, they just don’t seem to have the belief that they can do that. I think it all keeps feeding into that. The longer it goes on, the worse it gets almost,” says Digby.
“That Champions League win has almost become a necessity, to almost validate the things that they’ve done. Right now, it has never felt further away than it has at any point over these last 10 years.” 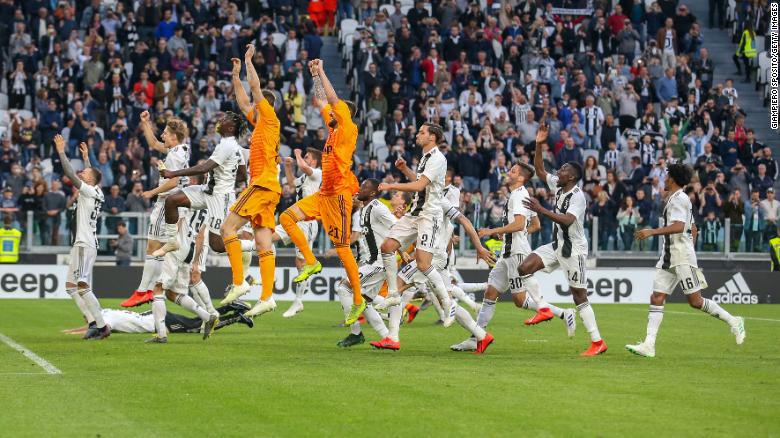 Juventus players celebrate after wining the leaue title in April, 2019.
The signing of Ronaldo, the changing of the club’s badge, were indicators that Juventus was a team on the verge of making the next step, joining the likes of Real, Barcelona and Bayern in Europe’s upper echelons. “A new era begins,” declared the club’s website when it announced its new logo.
But after Sarri’s departure following just one season in charge and the arrival of former player Andrea Pirlo in the dugout — a man with no prior coaching experience — to guide a young and much changed squad, Digby says the last few months have been a “restart.”
“There’s a real feeling that it’s moved further away than it was three years ago when Ronaldo first arrived, because the team’s not as experienced and as proven as it was before,” he says.
Ronaldo, however, is still performing to a remarkably high level. Aged 35, he is still scoring — two in three European matches so far this season, and eight in five in Serie A. His is a star not on the wane.
“Any team that has Ronaldo has got a chance to win the Champions League,” says Digby.
“I think that the opinion that you should be there or thereabouts because we’ve got Ronaldo is absolutely right. 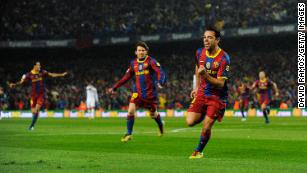 Ten years on from humiliating Real Madrid 5-0, Barcelona is a club in turmoil
“People already think that you have this team who comes close to winning the Champions League and then falls short, usually in the final. They couldn’t even do it with Ronaldo will be the next line of that.
“It really is almost a damning indictment of Juve’s struggles in the Champions League that even with Ronaldo … with Juve failing to build a team around him that can even get to the final at the moment is pretty poor.
“If they don’t win it during Ronaldo’s time at the club, that has to be seen as a massive failure. You don’t sign a player of that caliber unless you want him to take it to the next level.”
Juventus has been far from flawless this season — Pirlo’s team is six points behind Serie A leaders AC Milan, having drawn five of 10 league games — but the Italians have already secured progress to the last-16 of this season’s competition.
On Tuesday, the Bianconeri face Barcelona in the Nou Camp for a meeting of two teams in transition and a revival of the Ronaldo vs. Lionel Messi rivalry fans were accustomed to watching when the brilliant pair were both playing in La Liga.
Defeat against a Barcelona team which, despite its league struggles, has won each of its five group games this campaign, would not be a disaster for Juventus. But it would further sow seeds of doubt that what is almost a quarter of a century quest to be recognized as Europe’s best will ever end in success.